Over the past decade, Her Royal Highness Princess Reema bint Bandar Al-Saud has established a profile for advocacy of business growth, community health and women’s development issues. 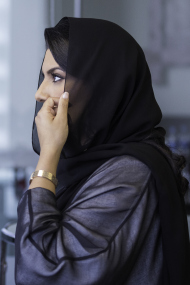 Born in 1975 in Riyadh, Kingdom of Saudi Arabia, her efforts as a global ambassador for positive social change are recognized internationally and she has become one of the most visionary voices for a more conjoined world. On August 1st, 2016, The Saudi Council of Ministers appointed Princess Reema to be the Vice President of Women’s Affairs at the General Sports Authority, a governmental body solely focused on developing the Saudi sports and physical fitness space in the largest national economy within the Middle East and North Africa region.

Her Highness was involved in a host of initiatives that continue to amplify and expand worthy causes both in the Middle East and around the globe. She is the founder and CEO of Alf Khair, a social enterprise whose aim is to elevate the professional capital of Saudi women through a structured curriculum focusing on professional guidance and career management.

Princess Reema previously served for seven years as the CEO of Alfa International, focusing on multi-brand luxury retail in Saudi Arabia. Under her leadership, the company introduced global best practices which raised efficiency levels to a historical high while becoming an innovative pioneer in integrating Saudi women in retail operations. With the goal of empowering women in mind, comprehensive training programs were developed for female staff members, all of which took place at a time when the retail sector struggled to be a gender-inclusive workspace. Due to her track record, Princess Reema was selected in September 2014 by Forbes Middle East magazine as one of the most powerful 200 Arab women.

In response to the many pressing public health concerns, Princess Reema launched ‘10KSA’, a holistic health awareness-raising initiative with a 2015 focus on breast cancer. The awareness effort included a community event that brought together more than 10 thousand women in the middle of December 2015 at a football stadium in Riyadh. The event went on to achieve a Guinness Book of World Record for organizing the World’s Largest Human Awareness Ribbon.

Her Highness also serves as a member of several advisory bodies including the ‘Saudi National Creative Initiative’, whose programs aim to create a communication platform for creative talent in Saudi Arabia. Moreover, she is a member of the international policy advisory board at UBER, the global transportation network company. She is also a founding member of ‘Zahra’, a prominent Saudi Breast Cancer Association of which she is still an active member.

Princess Reema accumulated a list of prominent recognitions, including being selected by the World Economic Forum at Davos as a Young Global Leader (YGL 2015), and being named as a Foreign Policy Magazine Global Thinker Mogul in 2014. She was also one of Business of Fashion’s Top 500 people working in fashion industry (2013 and 2014), and was picked to be Fast Company’s Most Creative Person of 2014.

A graduate of George Washington University, Princess Reema is currently focusing her energy on the responsibilities associated with her post at the General Sports Authority to further the goals of the national sports and physical fitness strategies in Saudi Arabia.